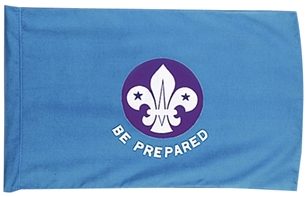 The Beaver Scout flag is light blue, bearing the Scout symbol and the Scout Motto.
Both the Union Flag and the sectional Colour are used frequently at religious services, Scouts’ Own Services, Investitures, parades and in camp.